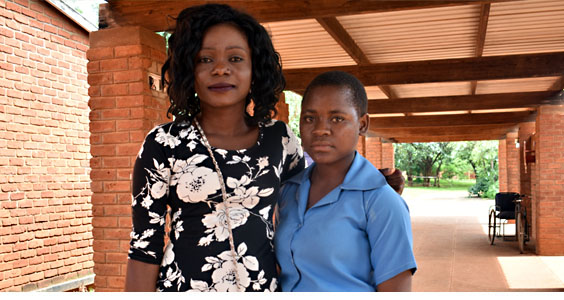 She is 15 but at that age, she is already tasked with the huge responsibility of taking care of her two brothers and one sister, all alone. She is just a kid but at 15 she plays the role of both the head of a family and a parent to her siblings. To make matters worse, she just started her first class in secondary school and she still has three more years to complete her education which means that she has to juggle between school and parenting her siblings. It is a formidable experience but she has no alternative.

Her story starts 2 years ago and begins with the bitter divorce of her parents. Daless’ parents separated in 2017 and her father left the kids with their mother. The divorce brought Daless’ future in education grinding to a dusty halt. She was then in primary school and awaiting to sit her final examinations that would see her progressing to secondary school. The separation also affected her academic performance and caused a notable decline in her pass rate in class.

Daless and her siblings stayed with their mother but it was to be for a temporary period because a few months after her father left them, Daless’ mother found a new husband and remarried. Strangely enough, she moved in with the new husband and abandoned the kids, in the care of their uncle. Being the eldest of the siblings, Daless, overnight, found herself turning into a parent and was left with the hardest job of caring for the other kids.

She was confused and stranded.

“We were left all alone. We sought help from our uncle but he has a big family and a lot of other responsibilities so it is quite difficult to give us full support.” Daless explained, adding that the situation meant that she technically was in charge of her siblings. Although her mother sends occasional basic assistance to the kids to help them with their essential needs, the assistance is not sufficient to sustain them. Without her parents and just partial support from an uncle who also faces financial hurdles, Daless’ chances of continuing with her education were reduced to zero but what Daless dreaded most was something else. Her youngest brother suffers from the neurological disorder, epilepsy and often has severe violent bouts of seizures. With both her parents gone, the duty of monitoring and nursing the boy was dumped in her hands.

“I have to make sure that he is fully under my watch all the time because he needs special attention. My main fear is waking up in the middle of the night and finding him in a seizure that I cannot handle. It has happened before and I fear it might happen again.” Daless explained, “I am just a kid who was forced to mature too early because of circumstances that I had no control over.” Actually, her brother’s condition is one of the reasons that inspired Daless to pursue a career in nursing after secondary school.

Despite the chilling difficulties brought forth by the divorce of her parents, forced to become a parent, and with a post-primary school future looking bleak, Daless worked hard and passed her primary school examinations with amazing results. She was selected to one of the elite public boarding secondary schools in Dowa District. However, she had no one to support her basic and financial needs, including school fees required to commence her secondary school. Tuition fees for her new school cost approximately 80 thousand Kwacha and that excludes essential school supplies such as exercise books and learning material. Daless realized that there was no way she could afford that much.

“I had worked to the best of my abilities to go to secondary school but after I passed my examinations, I suddenly understood that my journey had ended there. Where would I get school fees?” Daless recalled. Even her uncle could not help. His limited financial abilities could not allow him to support her education. All her dreams, visions and ambitions to progress with her studies and eventually get out of the miserable situation she was facing had come to a complete standstill. The shock and pain of knowing that there was no future for her after primary school were too much to bear for Daless.

“I looked at my brothers and sisters and I felt sad. I felt like everything was crashing down on us. It was like being locked in the darkness with no hope of ever seeing the light on the other side.” She recollected the ordeal with sadness branding her face. Daless’ predicament, shocking as it is, is no strange scenario to multitudes of vulnerable girls across Malawi. Only 34 percent of girls who start primary school progress to secondary school. Financial problems which result in lack of school fees, is one of the major factors contributing to this high rate. With 82 percent of the Malawian population living in rural areas, the situation is worse in communities staying in villages. Dales is among the myriads of hopeless girls that fail to advance with their education in the rural areas.

However, for Daless, her dreams were soon to be revamped. In 2018, her primary school English teacher, concerned with the fate of Daless, connected her to our secondary school scholarship programme. In September of that year, she was on the list of vulnerable girls we provided scholarships to in various public and private secondary schools.

“I felt like crying when I was informed that I had been selected to receive a secondary school bursary.” she said, “It was the news I had been longing for and I know that it is the first step towards realizing my dream.” Daless’ dream is to become a nurse and there is a very good reason she chose that profession. She explained that the health centre located in her community has a severe shortage of nurses and patients struggle to get help due to congestion. Lots of people are forced to travel many miles to neighbouring health centres for medical help. Her goal is to study nursing and serve the small health centre. Besides that, she also has a natural passion for the sick and injured.

Now that she has a scholarship, Daless is adamant that she will finally fulfil that burning ambition.

“I am very excited.” she explained “I now have an uninterrupted source of school fees. I no longer have to be concerned about where I am going to find money for my education. I am confident that I will accomplish the vision I have always have – becoming a nurse.”