Changing Lives One Card at a Time

Home / Blog / Changing Lives One Card at a Time

Changing Lives One Card at a Time

When you are living in the remotest parts of the village, where income is low and money is as rare as a pot of gold, life becomes unbearable. Even buying a bar of soap to use for laundry, dishes and body hygiene is often a real struggle. Circumstances can get much worse when you are a single parent caring for a child with a disability or if you are a refugee without employment. Under such conditions, you would be forced to either beg from neighbours or relatives, or take on miserable part-time labour to survive.
Such is the story of Belita Mtembe and Rosa Sindehebura, two women from There is Hope’s social business “Umoja”. The tale of Belita, a Malawian mother of four from Lilambwe village in Dowa, is heart wrenching. One of her children suffers from a severe case of cerebral palsy, and Belita had no form of income. At one point, Belita explains,
“I was forced to work odd jobs, the type that everybody refuses to do. I had to do that because I was desperate for money.”
Rosa, a refugee from Burundi shares a similar predicament. The woman arrived at Dzaleka refugee camp in 2008, with literary nothing to depend on. She, too, was faced with the challenge of taking care of her family’s basic needs. In Rosa’s own words she was “too poor to buy anything”. The woman has a disability and this made issues even more complicated for her. 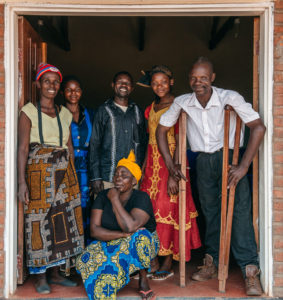 Hope shone for these two different women when they learnt about Umoja. Umoja is a group of people with disabilities or parents of children with disabilities who craft handmade greeting cards, and create some of the products for our “Kibebe Malawi” collection. The group earns an income from the sale of the merchandise. The artisans are made up of refugees from Dzaleka and Malawians from surrounding communities. When Rosa and Belita joined the group, their lives were transformed. For Rosa, she is forever grateful to the day she found Umoja. From living in despair she is now fully independent. “I can now afford to buy clothes for my children and food for my family,” she recounts with a smile “life is better than before.” The same joyful expression that Rosa has is visible on Belita’s face. Her song is different now – it is no longer pitiful. In fact, from the income Belita earns at Umoja she recently purchased a pig and is ready to start a small-scale pig farm. The happiness does not end there.
“My kids can finally go to school,” she tells us “I buy them clothes and pay for their school fees without any problems.”
This is just part of the impacts that Umoja has made on local communities and refugees. Apart from supporting individuals, the group sets aside 10 percent of proceeds for charitable works such as building houses for the most vulnerable in their community. Rosa and Belita’s stories are just two among many across our social business initiatives. Umoja is changing lives, one card at a time.